Need a load scheme to evaluate their condition. Like loading them at a certain current load for 1 minute; another load for 10 minutes, another for one hour. Measuring the voltage at end. Perhaps checking voltage recovery after a certain time with no load also ?
What convenient set of loads should yield what voltages to decide if they are good, marginal, spent ?
Would you do it that way ?
- Abolish the deciBel ! -
Top

If you have enough cells, use, and time, it may be marginally worthwhile. If you are intent on doing this I wouldn't over think it. Consider them to be like dollar store batteries; Just charge it, if it works use it, if not pitch it in the recycle bin. Even if they are free, at the going price of around $1 ea. in singles and half that in quantity with free shipping, do you really think it's even worth the effort to cull the bad from 'maybe' good cells? If you cull today, tomorrow some of the 'maybe good' may be bad. Assemble them into a pack with cell matching issues then finding and changing the 'good' that went bad and changing the bad for more 'maybe good' cells makes the whole deal's value seem less unattractive.

Thanks, Len.
All that makes good sense. I did not take in account the cost of cells; just saw the frustration of picking a bad cell from a bin of charged ones that some do well and others not at the moment of need.
- Abolish the deciBel ! -
Top

Last year I spent a lot of time learning about battery capacities because of my current Solar Light projects that I've been working on. I think you'll find that many of the new batteries are worse than your old ones or down right fake.
I learned that the hard way by purchasing batteries that later turned out to be fake.
Anyway, testing battery capacity isn't hard and I highly recommend you test every battery before use.
I'll upload pics of a tester that I use that is easy as pie. It's accurate enough to compare all types of batteries, up to about 10AH.
I recently bought some 18650s here in the US that actually tested a little over half of the capacity that they have marked on them. Almost all batteries bought from China are fake. They seem to have no problem just adding another zero to the capacity that they claim.
The best AA rechargeable battery that I found in the US were the North Tech at Menards and the Thunderbolt from Harbor Freight. They claim 2000mAh and they're pretty close to that for about $1.50 each.
I've also bought a battery charger for the AAA, AA, and the 18650 batteries. It works really good and you can watch how many mAh it takes to recharge the battery. Great for double checking the capacity of the battery.
The battery capacity tester is the: ZB2L3. You must make sure it has that label on the board. I bought 2 others that didn't and they both weren't any good for testing. Cost is about $5 from Banggood dot com.
The battery charger I recommend is the XTAR VC4 it has a nice lcd display. I'll have to upload a picture of that later. It cost about $20 on Ebay. 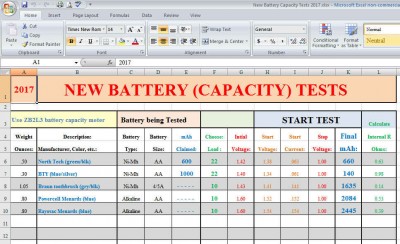 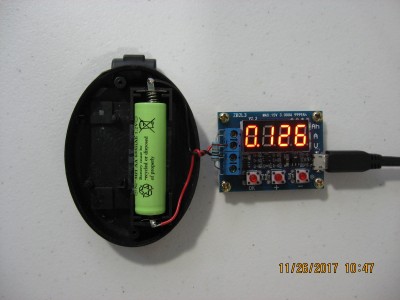 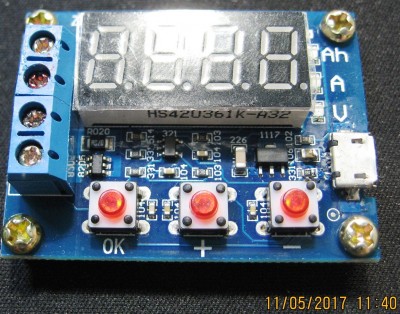 Here are the photos of the Battery charger and the new 18650 Batteries. 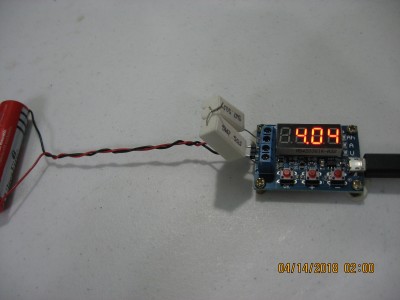 [The extension docx has been deactivated and can no longer be displayed.]

Oops, can only upload 3 pics at a time: 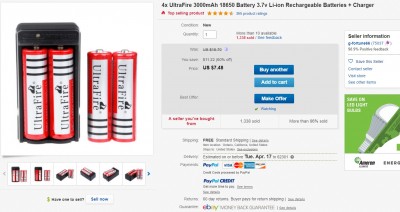 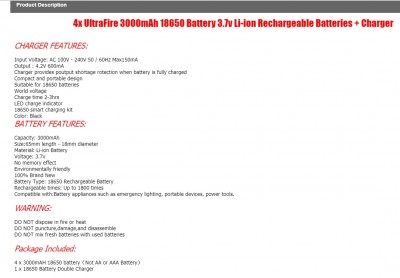 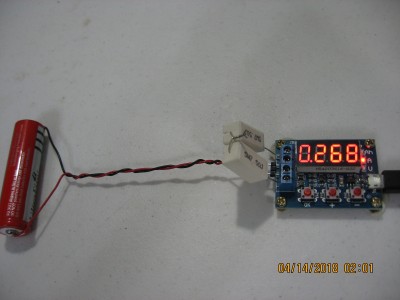 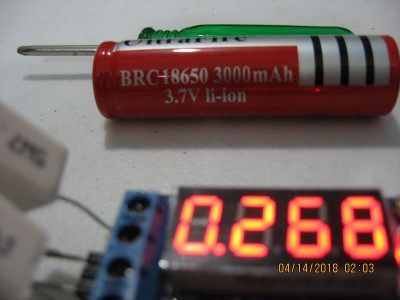 Looks like a nice inexpensive process. Capacity is not the only measurable parameter but it is a good catch all. Can you list the steps to your procedure?
Top

A Li-Ion Battery that is called UltraFire.

Well, at least they are giving you some truth in its name.
Or maybe what to expect from them in the near future, from these batteries.

The main check is the capacity. The capacity goes down as the cell ages so that's an indicator of how much the cell was used.

To check the capacity, the simplest way is to use a constant current sink that draws current from the battery until it gets down to the lower cutoff voltage which is usually between 2.5 and 3.0 volts.
The industry standard is to test at a current level of C/20 so for a 2 ampere hour cell that would mean the current draw should be set to 2000/20=100 milliamps.
The cell is charged up to max (usually around 4.20 volts) and then the discharge is started. For the 2AHr cell above if hte lower cutoff voltage is reached in 18 to 20 hours then the cell is like brand new. Anything less means the cell has been used or is fake.
Even if the cell is used however it may still be of use. For example, if it cuts out at 15 hours that means it still has a capacity of 1500maHr which is still good sometimes.

Now how you actually do this test depends on what test equipment you have and what you are willing to buy.
For example, a while back i used to use a specially developed four channel meter connected to the PC computer to measure cell capacities of four cells simultaneously. But before that, i used a volt meter and resistor load, and took readings about once every 10 minutes or so. Using a resistor means you have to log the current too though, which is harder to do then when using a constant sink circuit.
Now i use a dedicated charger/discharger device i bought from Amazon. It holds four cells and has an LCD panel that gives the readings of all four cells once the test is complete. It does not have to be connected to the computer so it is easier to use. It has several charge levels and several discharge levels, and does NiMH as well as Li-ion. The brand name on this one is OPUS, but there are several models and brands on Amazon ranging in price from 25 dollars to about 50 dollars (USD). They make all this so MUCH easier.
I also test NiMH and even Alkaline cells. When i buy a pack of 40 alkaline cells i sacrifice one cell for a discharge test so i can see if they really live up to their advertising. All i have to do now is pop the cell in, push a couple buttons, and wait for the test to complete or go to sleep and when i wake up the test is complete. Well worth having for these tests.
LEDs vs Bulbs, LEDs are winning.
Top

I noticed that the Opus tester is used by many professionals. If you use a constant current source, that still leaves the problem of monitoring the time it takes to finish the test at the voltage level selected to stop testing. I believe it's 1v for single cells and 3v for the 18650s. The one I use is good enough for all practical purposes. There's a Facebook group dedicated to professional di-hards of the 18650 batteries and battery packs. I'm a member of that group and most guys are using the Opus testers.
Top

I noticed that Max discharge current is the other primary specification used for selection. Naturally you would want a high discharge current for say a super flashlight but lower discharge and a little more capacity for something like a low power toy. How do you suppose one would measure that spec. I guess you could turn up the current on the load until you had too much voltage drop. If you were selecting for an actual application then you could test at the actual expected load current. Have you ever repeated a discharge test several times in a row using different load currents and plotted on the same graph. I wonder what that would tell you. Is capacity a constant over a wide operating range?
Top

Good question. I have tested at different loads using the same tester, but I didn't really graph anything. I have a picture of the spreadsheet of my test results. I'll upload that when I learn how to do that. I just haven't had much time to do so yet.
Top

evahle wrote: ↑
Sat Jun 16, 2018 12:30 pm
I noticed that the Opus tester is used by many professionals. If you use a constant current source, that still leaves the problem of monitoring the time it takes to finish the test at the voltage level selected to stop testing. I believe it's 1v for single cells and 3v for the 18650s. The one I use is good enough for all practical purposes. There's a Facebook group dedicated to professional di-hards of the 18650 batteries and battery packs. I'm a member of that group and most guys are using the Opus testers.

Yes if you use a constant current source then you have to log the time to 0.9v or whatever cutoff you choose. The OPUS i have goes down to 0.9v for NiMH and Alkalines.

That's not too hard to do really though, because if you watch it maybe very 30 minutes you will see it start to decline faster so you know it is getting close to the end. But you can also hook up a simple comparator circuit to light up an LED or set off a buzzer when one is done. The LM339 would be good for this.
LEDs vs Bulbs, LEDs are winning.
Top
Post Reply
23 posts

Users browsing this forum: No registered users and 11 guests