This is the place for any magazine-related discussions that don't fit in any of the column discussion boards below.
Post Reply
17 posts

What the heck is this Batteriser and will it really work as well as touted?

Sounds like e squeezed an SMPS boost power supply into a thing that clips on batteries.
Top

The math is fuzzy- If I'm only using up 20%, how does this give me 8 times the life out of the 80% remaining?
IMHO, I can't see it gaining enough to be worthwhile, but then I haven't seen the circuit.
Top

As with many such technology releases, the way it works is hush hush at least until someone buys one on amazon next month and tears it apart.

My best guess is that these is a circuit that takes input DC as low as 0.6V and boosts that to 1.5V. So there must be physical isolation between the battery terminals and what contacts the device the batteries are put in. The principal is easy enough to understand, most gadgets don't have such power supply circuits so they konk out when the cell voltage drops below what they device needs. Apparently they can use the lower cell voltage along with the current that can supply and boost that with a switch mode power supply circuit back to 1.5V.

Just about any device using lithium batteries and has built in charging like a cell phone likely already takes advantage of a similar circuit. Such a circuit may not be novel but to package it in something that clips on batteries and can be reused is rather clever. I look forward to seeing it and hope it delivers on its promise unlike compressed air cars (remember that debate here) and that gadget that electrolyzes water into hydrogen and mixes it in your carburetor to get unrealistic mileage for your car
Top

Sure, it's a boost circuit that anyone can build, although possibly not as small as that one will probably be.
All it has to do is take over ONE terminal of the battery to make it work, where one terminal has two connections with a thin layer of insulation...one for the battery, the other for the 'new' battery terminal.

But aside from it working or not working, the good Professor may have not considered the entire impact it might have on the industry. If everything else remains the same, then it should provide more run time (although certainly not 8 times more) but in any environment that has two living, thinking entities, there is almost always a feedback mechanism that greatly acts to keep things the same. In other words, the battery industry acts to fulfill their own needs, and thus adds feedback to the original intention. An example would be if they really got a device like this, would they start making batteries less powerful so they dont loose sales? The predator prey type models would probably show them going out of business if they dont do something in response, whatever that may be. So the overall increase in apparent capacity could only be 1.1 or 1.2 in the end. We wont know for sure until it happens though.

But yes the math is questionable. If you have 100 percent and you take away 20 percent, you are left with 80 percent, no problem yet. But if that 20 percent is then transformed into another scale where it becomes 100 percent (this is what the comparison does) then that 80 percent looks like 4 groups of 100 percent, so the entire ensemble comes out to 1 group plus 4 groups, and since each group is 100 percent the total is 500 percent. But that's not the increase, that's the total. The increase was only 400 percent. So we can only say we got 4 times more, not 8 times more. This is simple math.

But there are other factors that come into play which are not addressed at all, such as the cell internal resistance. The cell internal resistance increases with use, so even though there is 80 percent capacity left (which i doubt anyway) then the output could only be used for light loads otherwise it will draw the battery voltage down to 0.3v for example, where it wont be able to output anyway.

These are some of the pitfalls i can think off right off the bat, so there will probably be other drawbacks. For example, will the device take up too much room for some types of equipment? Hopefully not.

We'll know for sure soon i guess as they are set to go out in July i think. Good luck everybody

Devices that need 1.35V per cell, or more, to work; really are wasting alot of battery life. Luckily those are a small percentage of battery operated devices. An 8 time improvement is stretching the math.

Here is a link to a battery spec sheet. (especially check graphs on right side of page 2.)
http://data.energizer.com/PDFs/E91.pdf
Using batteries down to one volt, maybe 0.8V, would be good due to shape of the curve.

Ok, from the data sheet we see that the ratio is closer to 1:3, meaning a device that would normally run for 1 hour down to 1.3v would run for 3 hours down to 1.0v, and it drops off fast after 1.0 volts.

So this mean that for some devices we could get a 3:1 savings. That means if you normally have to buy a 30 pack of AA batteries to last you say the year, then with a good boost design you would only have to buy a 10 pack of AA batteries. That's more realistic, but still pretty significant.
Again, this is if the battery industry responds favorably to the new device flooding the market -- a device which has the potential to reduce their own sales of AA batteries by 67 percent.
LEDs vs Bulbs, LEDs are winning.
Top

Though,
I'm surprised battery makers like Duracell aren't making a battery that incorporates the circuit into the battery.

haklesup wrote: Sounds like e squeezed an SMPS boost power supply into a thing that clips on batteries.

A Joule thief circuit ? If that is it, it would be better to implement such energy squeeze longevity feature in the circuitry of devices that uses any disposable batteries, instead of having to buy several of those batterisers for a say 4-cell chamber. And 'batterised' cells would not fit a round chamber. I see a failure as cell 'backpacks'

JTzap: cell manufacturers would not pee against the wind. It would harm their very lucrative business of selling tiny amounts of packed energy at the most expensive prices per watt-hour.
- Abolish the deciBel ! -
Top

And then there is the 200 MPG carburetor and the Hydrogen generator that runs your car on a quart of water and....
Oh, Wait! That must be on another forum.....

Externet wrote:JTzap: cell manufacturers would not pee against the wind. It would harm their very lucrative business of selling tiny amounts of packed energy at the most expensive prices per watt-hour.

This reminds me of the rechargeable Alkaline batteries that Rayovac put out for a while, after Buddyl put out its Alkaline battery charger on to the market. 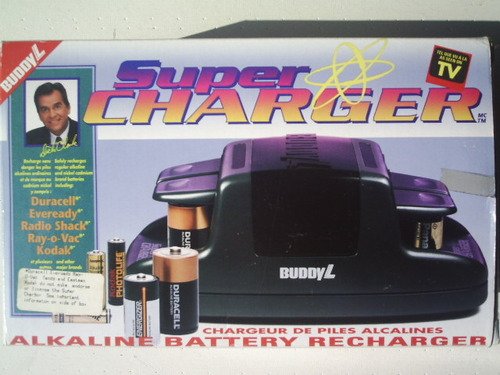 I'd say there are definitely some battery powered devices that will benefit but certainly not all of them and since consumers routinely exchange battery chemistries, I can see lots of people not using this correctly and not getting much of a benefit. For example pairing this with A LiIon battery would not be so useful because that kind of battery maintains its cell voltage longer and drops off quickly when depleted. The math is greatly simplified for a consumer to understand. As electronics experts we all know supply current would play a major roll here and is basically ignored when you talk about cell voltage. I bet that little batteriser gets hot under a high current load perhaps reducing its life. Also one more thing to fail and one more contact to go open.

I might get some after the initial price drop

I personally do not subscribe to the battery company conspiracy theory. With mobile devices pushing the market to longer life and automotive putting bucks into battery company pockets, they don't have that much motivation to rip off the consumer. Its no longer the days of the light bulb spec that required a maximum lifetime. Most of the competition is in providing longer better batteries, they also have to deal with environmental pressures to reduce waste.
Top

I smell a rat - or at least a PR snowjob.

I agree with the questions about the maths and claims of 8x performance posted so far. I guess that a boost convertor could be miniaturised, but I wonder about the quiescent current of the convertor, as well as the efficiency when the product is drawing current.

I like your question about the quiescent current draw, i hadnt thought about that yet myself.

With some modern circuits we can get this current down very low, such that we see the cell working for 2 years without fail. I did this for my refrigerator monitor, where i wanted it battery operated but didnt want to have to keep replacing the dang batteries.

The solution is to use a microcontroller to do all the work, and keep it in sleep mode for a large percentage of the time. For the monitor, that simply meant only taking measurements once in a while, like maybe every minute and then only displaying the results once every 10 minutes.

For the battery thing (dont like the name THEY chose either) they might use a uC to monitor the usage and turn it on or off as needed. This is just a guess of course, but unless they have another way of doing it this is a necessary thing to have because after all we cant have the cell run down in two days just because we have the battery thing connected.

Efficiency is another issue, and probably the best we can hope for is 90 percent. That's not too bad though, unless it gets worse. Boost converters are known to go down in efficiency as the input source voltage goes down (keeping the output voltage constant all the while) so it is still a question of how far does it go down. I would think it would stay above 50 percent though, so we'd see some average gain of maybe 200 percent. So instead of buying 20 cells for a given application over time we'd only have to buy 10 cells. That's still significant, but hopefully we dont find any other problems.

What i am wondering is how small they got the device size down to. I am wondering if it wont work on some devices, but they do seem to mention remote controls, which dont have a huge amount of room in their battery compartments.

Will be interesting to see how this works out, if it does at all that is.
LEDs vs Bulbs, LEDs are winning.
Top

Meet back here in a year and pick our winners?

I see that Dave Jones has sunk his teeth into this one... I haven't had a chance to watch the video yet, but here's the link: