by IBMJunkman
The article is great for the old IBM clocks running on 24VDC. Now we need an article on building a controller that injects signals onto the AC line for the clock shown below. I can't put my finger on the info as to what frequency the signals need to be. I have a book that shows the old tube circuit that does the injection. 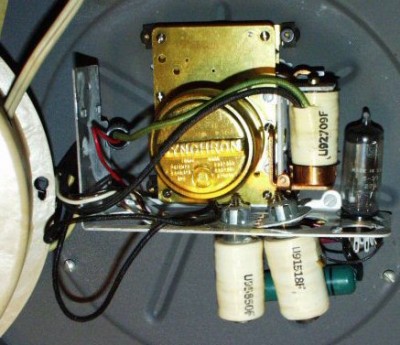 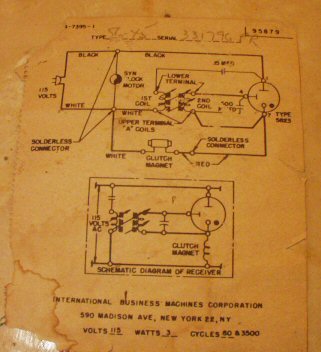 by AviatorFJ
I second that. I have a collection of Simplex/IBM clocks running 3-wire off a 6400 master and would love to figure out how to overlay the (approx) 3500 Hz carrier onto a 115VAC household circuit.

The idea of plugging any clock into any circuit without hard wiring is beyond a dream.

by Lenp
I worked on these systems years ago for a large school district. Yes many of them used a transmitter with parallel push pull 6L6's as outputs. Some of the newer systems had a motor generator unit with several generators, one for each frequency.
The master clock started the motor and keyed the selected generator through an exciter winding. The output was
coupled to the line with capacitors. Capacitors were also used for coupling across phases, or transformer windings.
We had a rather crude signal meter that measured the voltage of the control signals on the power line.

As a footnote, I have a quantity of used Italian Flip-Flap style clocks, branded ICON 30. They are 24 VDC impulse clocks with hourly correction,
and should work on the clock system described in the original article. Here is a YouTube (not mine) on the same clock. https://www.youtube.com/watch?v=2IRkG5m9b_Y
PM me if you are interested in these

by marc4g
According to my 1953 Sylvania Tube manual, the 6L6 is a Power Pentode.

The attached schematic seems to show a gas filed full wave rectifier of some type. (Similar to a 6X6 ?)

by Lenp
Hi Marc,
The 6L6's were used in the transmitter, not, the receiver. They were the output tubes.
The receiver did use the gas filled thyratron.

by marc4g
These clocks are starting to make sense to me now.

by Lenp
Ah yes. Carl & Jerry, old friends indeed!
Yes the carrier control signal fires the thyratron that operates the correction solenoid and the rest is the same as a wired clock. We used to add the receiver bracket assembly to the standard clock when needed.

If I remember correctly for clock control it was a single burst of tone for about 2 seconds long that operated the correction solenoids. Once the cam latched the correction process continued. As mentioned previously the carrier controlled bells required a timed sequence of two signals to operate. The first started all the code motors and the second, with critical timing l
atched an arm so the bell would ring at the end of the cycle. Even those could be controlled in a fully wired system with the right master clock setup. American Time and Signal has more lnformation.
I can check with some past associates to see if anything remains from years long ago.

by IBMJunkman
Large images of the clock backs.

by Lenp
In a nutshell the coil and cap across the power line is a series resonant circuit and the other coil is parallel resonant at the signal frequency. The bendable bracket allows coupling changes between the coils. When both coils are in resonance coil 2 developed a voltage that triggers the thyratron, which conducts, and energized the correction solenoid.
See... Microprocessors are not always needed!

by marc4g
I have a 1940 RCA tube manual and one of the 1st tubes in the thing is a 0A4-G gas triode. Looks like it basically a neon bulb with a control grid! The idea was to bring the 'starter anode' just up to the 'required breakdown' voltage. A voltage divider of 10k/(15k+10K) *117vac would give 46Vrms (66v Pk). Looking at the "Typical Breakdown Characteristics" it looks like the breakdown was a little over 80v.
I did notice that the "Outline' drawing was much larger for this tube that what was in the one in the clock.
I have not been able to find the one installed in the picture of the clock (miniature) on the 'web' though.

I would think that you could retrofit one of these things with an optically coupled SCR driver. Or just use a modern sync pulse of 120v half wave rectified and attach to clutch solenoid.
d

Thanks, this image makes it all clear!
All times are UTC-07:00
Page 1 of 1
Powered by phpBB® Forum Software © phpBB Limited
https://www.phpbb.com/