This is the place for any magazine-related discussions that don't fit in any of the column discussion boards below.
Post Reply
8 posts • Page 1 of 1

I believe I have a ground loop issue on my audio system and trying to find the best solution to the problem. My setup is as follows: I have a small “home theater” setup in my living room consisting of a television, DVD player, satellite receiver, apple TV, and audio receiver. All the video devices connect directly to the television via HDMI cables. From the TV, I feed the audio receiver (I use room speakers as opposed to the speakers on the TV). I also have a Russound whole home audio system that feeds several speakers throughout the house from an amplifier in the basement. The Russound amp is connected to the home theater amp via RCA composite cables. Everything was working fine until last weekend when I had the satellite dish installed. I am now getting a humming noise on the Russound system. If I disconnect the satellite receiver from the TV, the hum goes away. I'm assuming I have a ground loop issue.

I have a second satellite receiver in another part of the house, my “in-law suite”. That one is straight forward, satellite receiver connected to a TV without any other components. If I disconnect the RG6 feed to that receiver from the dish, the hum goes away on the Russound system. So, if I have just the one satellite receiver hooked up (either one) I do not have any issue. The in-law suite is on a separate electrical feed. It has its own utility meter and breaker box - there is no electrical connection between the two sides. Although both the main house and in-law suite is fed off the same utility transformer.

So, I am trying to figure out the best way to solve my problem. I would rather fix it outright rather than band-aid things with isolators. I know the technician did not ground anything. The satellite dish is mounted to a metal pole in the yard 2’ from the house. My first thought was to bond the metal pole, to the (floating) grounding block where the two RG6 feeds come into the house, to my electrical service ground - how it should have been in the first place. Then I was thinking about bonding both electrical service grounds together, but not sure if this is a safety issue or code violation. I don’t want to come home and find my satellite dish glowing red because I managed to introduce some electrical potential through the satellite system! Any thoughts?
Top

If as you say, the Satellite Dish was not properly grounded.
Use this video as reference to how the Satellite Antenna should be grounded.
Then check, or install the items that are called for.

Here is a diagram of a satellite system I did. Note: The Multi-Switcher is also grounded.

If after you've checked and made sure that the Antenna and cabling is properly grounded.
Your still getting hum.
Start checking the AC Outlets that the Satellite Receiver Boxes are plugged in to.
Use a AC Outlet Tester. 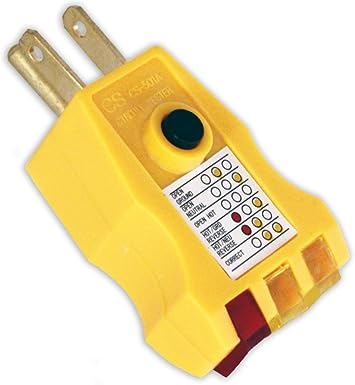 If that doesn't turn up anything.

Okay, I'm out of Ideas now.

for RCA connectors or 3.5mm jacks and low level signals, a "ground loop isolator" transformer works very well, this comes up a lot in Car audio connecting head units to amplifiers when relying on chassis for ground. lots on amazon or ebay etc. Just install it in series at either end, it does not need its own power supply.

for the antenna, just about any splitter will isolate this kind of noise in the signal conductor even though it may not exactly be ground looping. If you use a 2 way splitter and leave the second output unconnected, you should not loose too much signal strength. Excessive splitting is a problem by itself. I did see a ground loop isolator for 75ohm cable on amazon too which I suppose gaps the shield conductor and may also transformer or capacitor isolate the signal.


For other conductors, you may only need a clip on ferrite bead, HDMI should not transmit analog hum since its its a digital technology with error correction. Try ferrite beads on all the AC power cords if any low level hum remains after insetting the isolator on the RCA lines, these are meant to filter high frequencies so maybe that's not going to have a strong effect on this audible hum.

Given the occurrence of the issue, the new sat dish probably does not use the same grounding point as everything else. I don't know the hookup details but disconnecting the lightning ground and extending it to a point near the other equipment may help or perhaps you can open it it with a spark gap and let it float WRT earth ground.

one more thought PS, you can dump the RCA cables all together and convert to fiberoptic toslink or digital (one RCA wire instead of both) using a local to A/D to A converter. you need power at both ends for those but will be completely immune to ground loops. these converters are cheap and easy to get from various online sellers. Might even be wireless options to eliminate the RCA wires and all others but maybe more than you need, there are so many "modules" to choose from these days.
Top

Thank you for the replies - and I apologize for not getting back to this sooner, but I wanted to get the dish grounded and see what happens before I replied back.

Today, I ran a ground wire from the dish (connected it to one of the bolts on the dish itself and used a self-tapping bolt to ground the metal pole), to the grounding block between the dish and both receivers, and finally to the electrical ground on the service for the main house. The humming on the Russound was reduced but not entirely gone. So running this ground wire DID something. Just not enough!

I've attached a picture for clarification. I've included in the picture the ground wire I ran today. Again, my concern is the two separate utility feeds with their own separate grounds. And I think I am bonding both electrical services through the dish unwillingly via the RG6 shield. I'm going to install a ground block on the one for Receiver #2 and run the ground to that side's electrical ground. But I'm sure that's already happening through the chassis ground on Receiver #2, so I'm not sure if that's going to help.

I'll probably just install the ground loop isolator between the TV and amplifier - but I was hoping it was just a grounding issue. 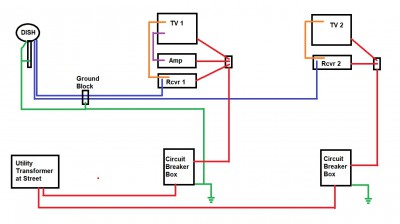 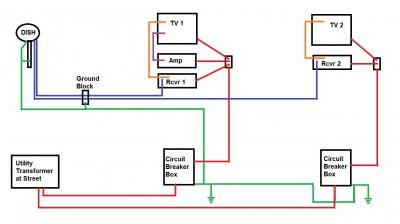 Then check for hum again.
Also...
Check the AC Outlets the Amp, and Rcvr 1 & 2 are plugged into.
You could have Grounding problems there as well.

I was thinking about doing that but wasn't sure if this violated any NEC rule. I know it's not uncommon for buildings to have several electrical services (apartment buildings for example) so there must be some knowledge on the safety of bonding them together. Then I'm wondering if this should have been done from the beginning. Our house is less than a year old and maybe bonding the services (if it's supposed to be that way) is something I can throw back on the builder to fix.

I do still need to check the electrical receptacles for proper grounding - I would hope with this being a new home with modern wiring, that shouldn't be a problem!
Top

Here is a diagram for wiring two breaker boxes together.

Yes!
You should check the wiring!

Story
My folks had a house built for them, and they had to have the electrician come back out and redo the wiring on several outlets.
Because they either had the wires reversed, or connections had loosened, making for bad grounds on some outlets.

In any case.....
Use a Outlet Tester, {Like the one that I posted earlier} and test the AC Plug Outlets.
They are not that expensive, and can be found at your local Hardware or Building Supply store for $20 or less.
If it shows you have a problem.
Get the Electrician back out to fix it!

you'll run in circles trying to rid electrical noise by modifying the "Safety Grounding" since the ground of concern is the "Signal Ground" comprised of the shield in the Coax cable. All that other stuff is only to protect you from electrical shock in the event of a fault or lightning and was never intended to improve signal quality, in fact it often makes it worse.

Note that ground in 2 different locations on the property can have significant difference in DC voltage causing current to flow all the time when connected together, this is not usually noticed. If this current returns on the coax shield, then you have a loop. It would be interesting to stick a DC ammeter in series with your new ground connection to see if that is happening or between the 2 breaker boxes. The AC noise you hear is probably superimposed on the DC current. Aside from ground loop isolation, single point grounding is the other less effective method in which case you might connect the boxes together and eliminate the second earth ground or run that all the way back to the first. I am not sure what code has to say about those options, I didn't do that kind of research.
Top
Post Reply
8 posts • Page 1 of 1