This is the place for any magazine-related discussions that don't fit in any of the column discussion boards below.
Post Reply
13 posts • Page 1 of 1

Being in electronics since day 3, we get dumped on for all sorts of odd problems.

Recently, a friend dropped off a rather interesting 'gizmo' and a story to go with it. He ordered a 'fiber optic light kit' quite some time ago and just got around to getting into it. What he found in the box is a bit of a puzzle. First there was a real el-cheapo fiber light which was a small hand full of fibers and a toy-like pink plastic base that held 3 batteries and a couple of colored LED. Put in the batteries push in the fibers and the colored lights flash making a feeble attempt to light the fibers. Amazon has them right now, for ...$0.99 +shipping..No kidding.

But..
Also in the box was a poly bag with a PCB, a small hand full of parts, and a coil wound with a single strand of fine wire, about .75" diameter and 2" long. The instruction papers are all printed in, I think, Chinese. Gratefully there was a board schematic but no other information. The circuit appears to be an oscillator, with a couple of small transistors, and power transistors, two 3.5mm Jacks, helpfully marked J1 and J2. There’s a couple of pots, a pinch of resistors with a sprinkling of some small value caps. The board screening has a circle the size of the coil so it looks like the coil stands tall on the board.

Looking at the schematic, it appears to be an oscillator, probably RF. Since the coil is just a single layer without a primary, it is likely not high voltage, but it does have one longer wire tail?
So far this looks like it has absolutely no relationship to the enclosed fiber lamp, aside from both being in the same box.

It gets better, there's more....
In another box was a carefully wrapped 3-4" solid glass globe that has a neck, similar to a typical old-school light bulb. The neck has a recess in the bottom and there is a short solid glass stem with a metal cap? Ah-ha! Maybe that cap is related to the long tail on the coil? And No. this is NOT an evacuation tip. This bugger is solid glass and heavy. Looking carefully at the globe, inside there appears to be some flakes of material in a ring, or constellation like pattern, and there are more random flakes of whatever it is, scattered about.

So, from all this, I surmised that the material in the globe may illuminate, glow, twinkle, sparkle, or whatever, when it is excited in the presence of an 'energy field' from the PCB.
There was nothing else. No housing stand or other treasures inside the China Post package..... It sure looks like someone just swept the floor, tossed it all in the box and away it went across the pond.

Although I found the cheap fiber lamp online, nothing that resembles the rest could be located. He is trying to get a refund for his $149.00...

but because in the time that passed since the order was received, he has lost the paperwork and is being stonewalled by PayPal. If he fails to get a refund, then I'll assemble the board and let you know what happens..unless It 'Beams Me Up' !
If you have ever seen such a thing, or are so inclined to comment, I would certainly appreciate anything to 'shed light' on this .....thing!
Len

It sounds like you have a Plasma Globe Kit, that has an audio input for making it respond to music. 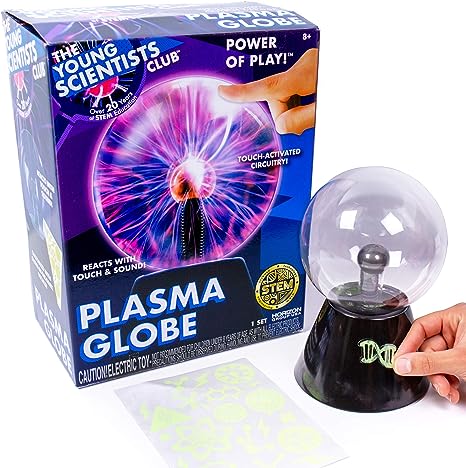 I've looked online for DIY kits.
But I'm only seeing ones for 5" or larger Plasma Globes.

Good try J.T., but no cigar!
I am very familiar with plasma globes, and this is NOT a plasma globe.
As I mentioned in the post, the glass globe is solid, with the little flakes in the glass.
There is no 'inside' since it is all solid glass.
Len

A bit of a stretch - have you ever watched "The Road To Wellville"? Great comedy about the Kellogg Sanitarium around the turn of the 20th century when Electricity was THE thing to cure all manner of ills.

With that as background, my guess is that the circuit sets up enough of a magnetic field that excites the "doped" glass so as to create a slight tingling when placed against bare skin. You'd expect there to be some sort of enclosure for the electronics in order for them to operate consistently without external capacitance or other "human" electronic interference.

Just like in "The Road To Wellville", try not to become Mr. Unpronouncable. (Watch the movie and you'll understand that comment.)

Hi CeaSaR
Yes, it needs an enclosure but since it all looks like floor sweepings, there was none.
I think you are in the ball park about the magnetic field, but because the globe has that single metal contact on the bottom, there are small value caps, and that 4" long wire tail from the coil end that may connect to the globe contact, I'm looking more towards possible RF as the excitation field.
Possibly I'll be able stuff the board, make something happen and then post the results.
Len

Plus an attempt to have PayPal pay for a new fraud scheme... ?
- Abolish the deciBel ! -
Top

Yes, that's like the cheap FO light that was included with the mysterious other stuff which was the focus of the post.

Maybe it was a scam, but the package did contain real stuff. The mystery is, what it is.
Len

Can you take a picture of the parts, and post it here?

Well as soon as the person determines if he will get a refund, he will make a decision.
Maybe I can get him to take some pictures before the decision is made. In all probability It will be landing on my bench soon.
Thanks for the input!
Len

CeaSaR >> are you speaking of a thing called a Violet Wand ? I used to use such a tool, but it was way different, the base was the same, but it used a metal probe instead. I used it to detect leaks on neon tubing that was brought in to me for repair ( I used to make NEON years ago. I kinda miss it. )
If the neon was not obviously broken, then i used the probe to find the crack. It was sort of like a mini hand held tesla coil.
you run the probe along the glass in suspect areas ( usually around the electrodes ) and when you found it.. the arc would penetrate thru it.
It'd light you up too with metal probe..lol
see attached pictures.. 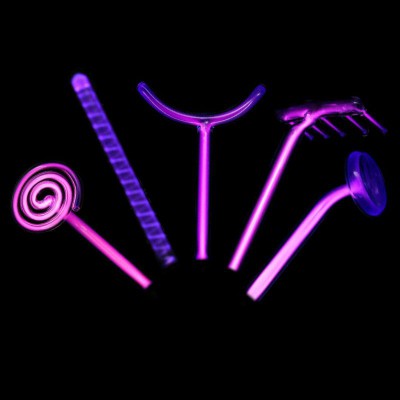 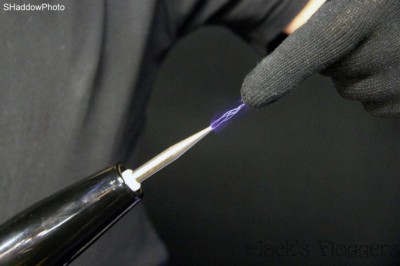 Dac,
Not quite, but the last one you show on the right (the flat paddle) looks like an attachment that was in a kit for some sort of, I think, Infrared heat massager thing my parents had back in the day. No idea how old it was back when I was a kid, but it had a cloth covered electric cord, so it had to be back in the 40's, probably. I don't even remember how it worked, but I do recall the kit.

Like I said, if you've ever seen the movie, you'll know what I mean by the description.
Hey, what do I know?
Top

sounds like the parts in the bag can make some kind of tesla coil or just a HV supply but how it interacts with the glass ball and whether that is some kind of insulator that acts like a handle or just a gee wiz toy that sparkles as you guessed, I can't say without a photo. Details about construction are unclear.
Top

Yes it is a Tesla or HF generator by the look of the parts. As soon as I get the 'stuff' I'll update the post.
Len

Users browsing this forum: No registered users and 35 guests