This is the place for any magazine-related discussions that don't fit in any of the column discussion boards below.
Post Reply
10 posts • Page 1 of 1

Ok, here's a head twister for the new year.
I am servicing an aged book binding machine. It has has an Omron batch counter, to stack the books for packing, and it just stopped counting. A total counter is connected in parallel to this batch counter's input to total the full production run, and it is working properly.
The counter's input is 120VAC, through a cam driven micro switch then through an obsolete isolator module made by Red Lion that changes the voltage pulse to a transistor switch output.

A meter across the counter inputs shows the micro switch's pulses being applied to the counter, but it was not counting. Shorting the input created a valid count. The decision was made to replace the counter since it may have had some damaged input circuitry.

Wrong, a new, same model counter had the same results. Now, could it be the isolation module, not driving the counter properly? I located some NOS modules, installed one and bingo, same thing again. Still not counting. I hauled both counters and modules back to the shop to investigate. Shop testing provided the same no count condition. Careful disassembly of a module revealed what was anticipated. There was a series resistor from the 120 VAC input into a full wave bridge. The DC output powers the isolator's LED through another resistor. The output transistor went to the counter's input and common. Simple and bare bones. Resistance tests showed the transistor was conducting, but although it would not count, a resistor of the same measured value, or a jumper, counted perfectly and polarity reversal of the module output made no effect

Well to finally get to the end after a large circular path, I found that the counter was seeing 120 Hz pulses from the FWB in the module, not a clean closure. A 10uf/50v capacitor across the counter's input fixed that and now all is well; with both counters and all modules. The count input speed is slow, around 40 per minute, so the time constant of that small capacitor is negligible and does not affect the counting.

BUT Now the big question still remains. This is an old machine and has been in heavy use when it just stopped counting. Naturally the manufacturer, like the service documents, no longer exist. I do all their controls maintenance, and there was no evidence of a capacitor in this machine, or wiring changes. So, how, and why did the counter ever work and then just stop?

I don't like fixing things when I don't know what failed. Any theories, guesses or conjecture would be welcomed!
Len

You say there was no capacitor originally, yet you describe an AC-DC rectifier circuit. The output from the diode bridge would be a 120 Hz pulse; exactly what you were seeing. Adding the capacitor smoothed it out to rippling DC. How DID they not get a 120 Hz jitter without a capacitor?!?
Top

That"s why it"s so puzzling, but, it did work for years. These modules were made to interface to the Red Lion brand of counters but the OEM used the Omron counter??

I considered a simple relay for isolation but the counts, in the thousands a week, would probably require frequent relay replacement.
Thanks for the response!
Len

So 2 "new" modules and counters. Anything else from the machine you took to the shop?

Sounds like something else is "worn", maybe a weak transistor or some sketchy wiring / bad ground issues that are Band-Aided with the cap in place. As you say, it makes no sense as to why something would not work with the original / correct replacement parts.

Lastly, how is the switch / it's interior contacts? With the description of the transistor seeng 120 Hz, there's got to be a leak somewhere from that FBR. Like you said, it needs to see a good, clean pulse to work. The cap cleans up the crappy signal and even gives it a bit of a boost. I'd study the schematics and wiring diagrams to try to pinpoint the culprit.
Hey, what do I know?
Top

Hi Ceasar
The machine was not brought in, it is bigger than my shop so only the counters and the modules were returned. No other components are in the mix.

The problem was duplicated in the most basic configuration of counter/module and power and adding the capacitor tamed the shrew!

As said by MPGMIKE in his post the 120 hz is normal and expected from a FWB.

The counters supply a low voltage dc between the common and count terminals that when closed, triggers the input. When the opto is fired, that low voltage is 'modulated' by the 120 hz from the FWB. Since the counter"s top speed is 30hz, it is simply ignored as being out of range.

The cap could have been placed on the FWB output or the LED side of the coupler, but that may have needed a larger value and a longer time constant, plus stripping the potting off the module to gain access.

To add to all this...
I hooked up a different counter, with multifunction features and a much wider input capability. It raced through the counts since it tried to follow the 120 hz pulses from the module, but it counted properly with the cap connected.

The plot thckens...
How and why it failed are still open questions...
Len

Sorry, but what is "FWB" stand for?

I have not worked on industrial machinery, so I may not understand what it is.

Though........
I'm wondering if you might have a compound component?
I've worked on consumer microwaves, and some of the high voltage capacitors would have Diode & Resistor built in to them.
Thankfully the schematic on the inside of the microwave case showed this, because the component only had a part number stamped on it.

Hi..
FWB is a common abbreviation for a Full Wave Bridge rectifier! (4 diodes in a square arrangement)

Nope, the isolation module has all common parts:
4 diodes, 2 resistors and 1 common opto-coupler plus the wires, all on a single sided board.

Simple as pie...WELL MAYBE TOO SIMPLE!
Thanks!

PS: Is there still no easy way to attach files, like a PDF, to this dying forum?
Len

As for Attaching Pictures to a Post......
I first try finding an image of what I want in my post.{Out on the WWW}
Copy the location address.
Then select the "Insert Image" button, then I would paste the address in to it.

You can use the "Attachment Tab" when you post.

Thanks JZ,
What about something I want to post that is not on the net, but on a local drive? I guess I have to post it online someplace so the forum can find it. It all seems a bit backwards when you can easily attach documents to email. I guess the forum has no mechanism to store the files so it just links to them . It appears that email stores documents or you would not be able to retrieve them from multiple systems until they are deleted from the server. Humm!
Thanks
Len

First off, don't just use the "Quick Reply".

Open up the full editor.
Then go to below the text window to the ATTACHMENTS TAB.
Click on it.
Then click on ADD FILES.
Find the Image you want to post.
{On your computer, or whatever you have the picture stored on; USB Stick, Phone, Camera, External Harddrive}.
Then Click on PLACE INLINE.
Example: 6Vdc Power Supply 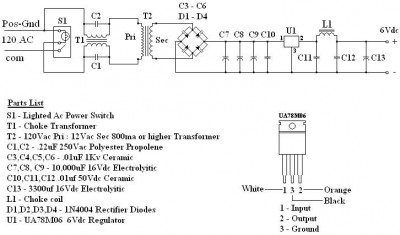 And there you go.

Users browsing this forum: No registered users and 43 guests