This is the place for any magazine-related discussions that don't fit in any of the column discussion boards below.
Post Reply
5 posts • Page 1 of 1

Do you remember the IBM ThinkPad? The model I have is in excellent condition.

They all have a large open slot called an Ultrabay. Hard drives, floppy drives, and CD players can
be quickly installed and removed from the Ultrabay. (See attached images.)

I'd like to use my old ThinkPad for a project.

With a hard drive installed in the Ultrabay you effectively have two internal hard drives. Both drives
appear normally in the CMOS setup. Years ago BIOS settings were very limited. There is no easy way
to enable or disable a device.

Is there an app or a BIOS add-on that would disable or kill power to one of the hard drives? About 20
years ago a guy paid me to build a desktop with six independently switched hard drives. There were
no mechanical switches. It was all done with optocouplers.

I won't do anything that might damage this ThinkPad. It's working perfectly. Opening the case and
tinkering with a laptop motherboard is too risky.

I need an app or some kind of box that plugs into a ThinkPad port.

I haven't started googling yet. Maybe if I search for several hours I'll find something. That's why I'm
posting at Nuts & Volts. 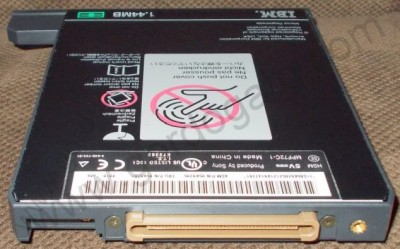 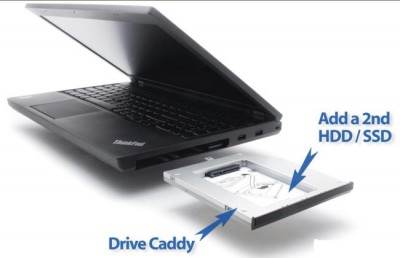 is that a SATA port, if so you may be able to make a daisy chain cable leading externally or to a connector block

even finding a little technical info in the interface was difficult, here is something, some posts let me to think it is a SATA or PATA port.
https://forums.lenovo.com/t5/Lenovo-P-Y ... -p/1463829
Top

IBM (and then Lenovo) stopped manufacturing the ThinkPad a few years before serially connected hard drives.
Look closely at the Drive Caddy image. You can see a standard PATA connector.

I really liked the ThinkPad design with that Ultrabay. I suppose it's not needed anymore, because any new
external device connected to a USB 3.0 port will move data very quickly.

The project I have in mind requires reliability, not speed. That's why this old ThinkPad seemed like a
good choice.
Top

Information is sketchy at best.
Plus, there are multiple versions of the Ultrabay.

Windows from 7 to 10 has a sleep setting for the Hard Drive.
But if cache, or "Write Behind" is enabled, the drive won't spin down.

Also here's Revosleep.
Supports: (Windows XP/2003/Vista/7 - x64) & (Windows 2000/XP/2003/Vista/7 - x86)
WARNING!
NOTE: I can not guarantee that the program won't damage your computer.
So use it carefully - using revoSleep at your own risk.
Setting Hard Disks to standby-mode very often, can damage the devices.
So don't switch the sleep-mode every time.
http://revosleep.realspooky.de/

I'm scratching my head as to why you need the second HDD?

If your worried about it getting damaged while your carrying it.
How about an SSD instead of an HDD as the 2nd drive?
{No moving parts}

Or if storage space is the issue.
Upgrade the BIO's to the latest version that is available for your ThinkPad.
Then get the largest HDD that it will support, and partition it out into multiple drives.
{C:\ D:\ E:\ Etc.....}

I think with PATA you can just manipulate the drive select pins to turn drives on and off externally; I'm a little rusty on that interface
Top
Post Reply
5 posts • Page 1 of 1

Users browsing this forum: No registered users and 44 guests