No keyboard, no display, no Windows...

This is the place for any magazine-related discussions that don't fit in any of the column discussion boards below.
Post Reply
1 post • Page 1 of 1

No keyboard, no display, no Windows...

Circa 1970. What were these indicators, knobs, lamps, buttons and dials doing/telling ?

At 17, studied DOS/TOS(Tape operative system)/Cobol for one of those System 360/30. When finished, another model System 3 was the trend, with RPG II (Report program generator). Start learning again... it never ended. As obsolete out of the factory as today. That has not changed. 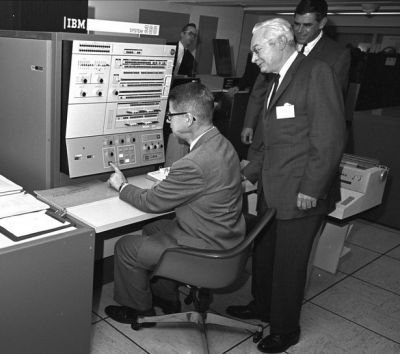 A couple of years later, I was into programming RPG II for Datapoint.
----> http://www.stemhistorysa.org/uploads/6/ ... 2_orig.jpg
Which did not survive much longer... but hey! TOS was on dual cassette tape drives (seen on top) instead of the armoirs, had keyboard and display !
- Abolish the deciBel ! -
Top
Post Reply
1 post • Page 1 of 1