This is the place for any magazine-related discussions that don't fit in any of the column discussion boards below.
Post Reply
25 posts

jwax wrote:Seems lightning was listening- Had a strike very near the house and the home pc decided to die the way mother boards die, silent but deadly. No visible signs, but will not turn on. Power supply OK, but as soon as it is plugged into the mother board, power supply shuts down. Toast.
Yeah- new pc and a hefty surge suppressor.

Have you thrown out the old mother board yet?

Some times the surge only messes up the chipset on the mother board.

By removing all power from the Mother Board, it can reset itself.

Start by;
Pull out the CR2032 3V Battery.
Short the CMO's BIO's Jumper.
Remove all power connectors from the Power Supply to the Mother Board.
Disconnect Cables from All Drives.
Remove all Cards from Slots.
Remove RAM from Memory Slots
Let the Mother Board sit like this for about 2 hours.
{We want to make absolutely sure any Capacitors are fully discharged.}

Now reinstall and connect everything backup.
Put the CMO's BIO's Jumper back in to "RUN" Mode.

Try turning it on.
If all went well, you'll get a boot message about re-doing your BIO's settings.

I've seen this happen to lots of computers, and this technique normally works at bring back a messed up Mother Board.

Still got the pc in the scrap heap.
I'll try that Janitor Tzap, but how do I identify the CMOS Jumper? There's a 3-pin male, with a shorting bar across two of its pins near the CMOS battery- could that be it?
Will keep you posted, and thanks for the info!
John
Top

jwax wrote:Still got the pc in the scrap heap.
I'll try that Janitor Tzap, but how do I identify the CMOS Jumper? There's a 3-pin male, with a shorting bar {jumper}across two of its pins near the CMOS battery- could that be it?

Yeah,
That sounds like the right one.
{If your lucky, there will be some printing on the mother board. Either "Bat" or "CMO" next to the 3-pin header}

But if you still got the Manual, or just look up the Mother Board Manual by its Model Number on line.
It will show you where to find it.

Good luck with it!

Look at the Mother Board carefully.
Especial around the power connectors.

Then it's time to chuck it.
{Unless your willing to spend the time unsoldering the bad capacitors & replacing them.
And maybe even replacing voltage regulators.}

Question; How do you know the Voltages from the Power Supply are there?
Did you check them? 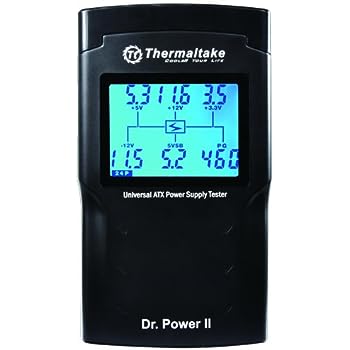 I like this tester because it can give you the condition of the power supply, as well as the voltages.

Well it's up to you, whether you want to tinker with it some more.

And I thought I saw some weird things in 60+ years in electronics!
The pc was still dead after doing the Janitor Tzap procedure. Later in the day, still dead. Twice tried. Dead.
At this point, since it's dead, no point trying to fire it up again, right? It is dead!

This morning, I went to pull out the hard drive to recover data, and thought, "Let's try one last time".

It chooched! It started! It runs fine like nothing ever happened! Desktop icons rearranged, but it works just fine!

What, in the world of Satan, is going on here? How, after 24 hours, did this beast rearrange it's electrons to fix itself? True, it was plugged in to 120 VAC, but was dead. Off. Lifeless. Expired. Bereft of life.
An ex-computer.

Perhaps a shorted capacitor has 'healed' itself.
I have seen this with HP systems and their crappy capacitors.
Were I you, I would not get a block party permit just yet!

While Shorted Caps do not heal themselves, the short failure mode can fuse open leaving no impedance in its place. the circuit may function close to normal depending on what failed.

Opens due to connector series resistance faults can take several reinsertions to clear up and may appear time dependent. For example a 5V source may be compliant at low current but then drops too low when load is applied if the connector is putting 10 ohms or so in series. In what we build, self test starts up OK then the resource disappears until you power cycle and try again. Self test causes supply current to increase and that causes 5V to fall below 3V and the logic forgets everything. Replacing the connector fixes it.

Get what you need off it while it is running, it might not start next time.
Top

Lenp wrote:Perhaps a shorted capacitor has 'healed' itself.
I have seen this with HP systems and their crappy capacitors.
Were I you, I would not get a block party permit just yet!

I agree.
Grab the data off the drive.
Back it up, before it completely goes bad.

Pull it outside, and with the side panels and front panel off.
Blow out the dust with an Air Compressor.
Set the output pressure for 40 to 50 PSI.
Note:{When blowing out the dust, do all the cracks and crevices on the Mother Board.
Check for dust in the RAM Slots, Video Card Slot.
Use a popsicle stick to hold the fans still while b;owing the dust out of them}
As I said in my previous post:

Look at the Mother Board carefully.
Especial around the power connectors.

Then it's time to chuck it.
{Unless your willing to spend the time unsoldering the bad capacitors & replacing them.
And maybe even replacing voltage regulators.}

I've seen ATX Power Supplies show all the right voltages.
But as soon as you put it on a load, it would fail.

{Checking online}
Currently you can get 650Watt to 350Watt Power Supplies for $40 or less.

But, since you have time to tinker with it.
I'd say pull the ATX Power Supply from the case, and pull the power supply a part.
Check the capacitors in it, looking for signs of damage.

I've re-Cap-ed some of these power supplies, and they have held up for a few more years after repairing them.

Well it's up to you, whether you want to tinker with it some more.

Edit: haklesup could be right about PCB trace failure.
Or connector issues.
But that would require pulling the Mother Board out of the case.
Removing the CMO's Battery, and discharging the Capacitors on it,
before you can inspect or repair the traces.
Normally I concentrate on where cabling plugs in to the Mother Board.
Also, I check Cables for nicks, or if it has been pinched.
Top

Users browsing this forum: No registered users and 42 guests