by dacflyer
this powered speaker i am working on must be built like a tank.. i cannot find any info of it having any problems on the net.
but this one i am working on for a customer is being annoying.
it is a class D amp.. the audio IC is actually tiny..but boast 200W continuous.
anyway the problem i am having is with the SMPS. it is not reliably starting up.. and i am not sure what to look for.
i am sure its something in the start up circuit,, if you plug it in, it will power up for a micro second then go to a very dim pulsing led., but if i use my variac and have it around 100 volts then turn it up to 120v, it will work just fine. but anything above 120 and it shows it's ass ... anyone ever delt with a SMPS doing stuff like this ? what could it be.. ?
right now i am at a loss.. i guess next step is to call the tech support line..

Sounds like a bad AC Filter Capacitor on the Hot side of the supply.

I had a AT-Power Supply that was like that.
Only it would pop the fuse.

If I slowly brought the AC voltage up, instead of just putting the 120Vac to it,
the AT-Power Supply worked just fine.

Funny thing, the Capacitor read fine on the DMM.
But when I connected it to a Z-Meter for a more through test, it failed it.

Also, I'd check the other Capacitors, like a 10uF or .47uf in the oscillator circuit.

by dacflyer
I need a schematic 1st.. if i can find one

by VernGraner
Don't know if this helps...

by dacflyer
thanks, but it is nothing close to what i have... i'll call the maker sometime soon as i find time.. maybe they've got tech support.

by dacflyer
well i found out the amp is made by Music-group..but their tech support is nonexistent.
but i did find a trick to make the thing turn reliably each time..
turning it on make it fail to start, but if you turn it off til the power light turns on, and then turn the amp back on before the power light goes out,, the amp will stay on.. tried it several times and no issues.
but other than that i don't know what the cause could be, especially with no schematic..
i'd never buy that brand..

by haklesup
possibly choking on inrush current and shutting down under a current limit or short like fault situation. SMPS may be underpowered or degraded in some way or the load is degraded or poorly matched to the supply. When you flip off since you say the light is still on, that implies that the supply caps are still bleeding power into the circuit probably holding the load partially on. When you flip back on, the partially charged load does not need as much inrush current to finish powering up and apparently stays below the supply's current limit. Adding a series resistor to limit peak current but not so big that the load is underpowered might help but that's crude and power lossy. Need to find a way to allow the inrush without it shutting down the supply. Perhaps an NMOS transistor with the gate tied to the source. This will saturate and limit current with less voltage drop than the resistor. If the SMPS has some adjustability, try that.

by Lenp
What about trying an NTC thermistor in series with the load?

Who is to say that the 1200 series was not cast from the same mold as its big bruddah 1800 series?

Check this out . . . . .vewy-vewy cwosely . . . and see if they basically aren't being a like match in the power supply circuitry .

Alas, the thermal delay line sensor is now seen to not be a consideration by its present inclusivity within RED boxed R34 at top left corner.

If your unit is the same . . . initially check out the actual capacitive values of the YELLOW boxed considerations as well as their ESR conditions.

I will refrain from any further detailed circuit analysis . . . . at this time . . . pending your comeback on the identically of circuitry betwixt the 1800 and 1200 series . 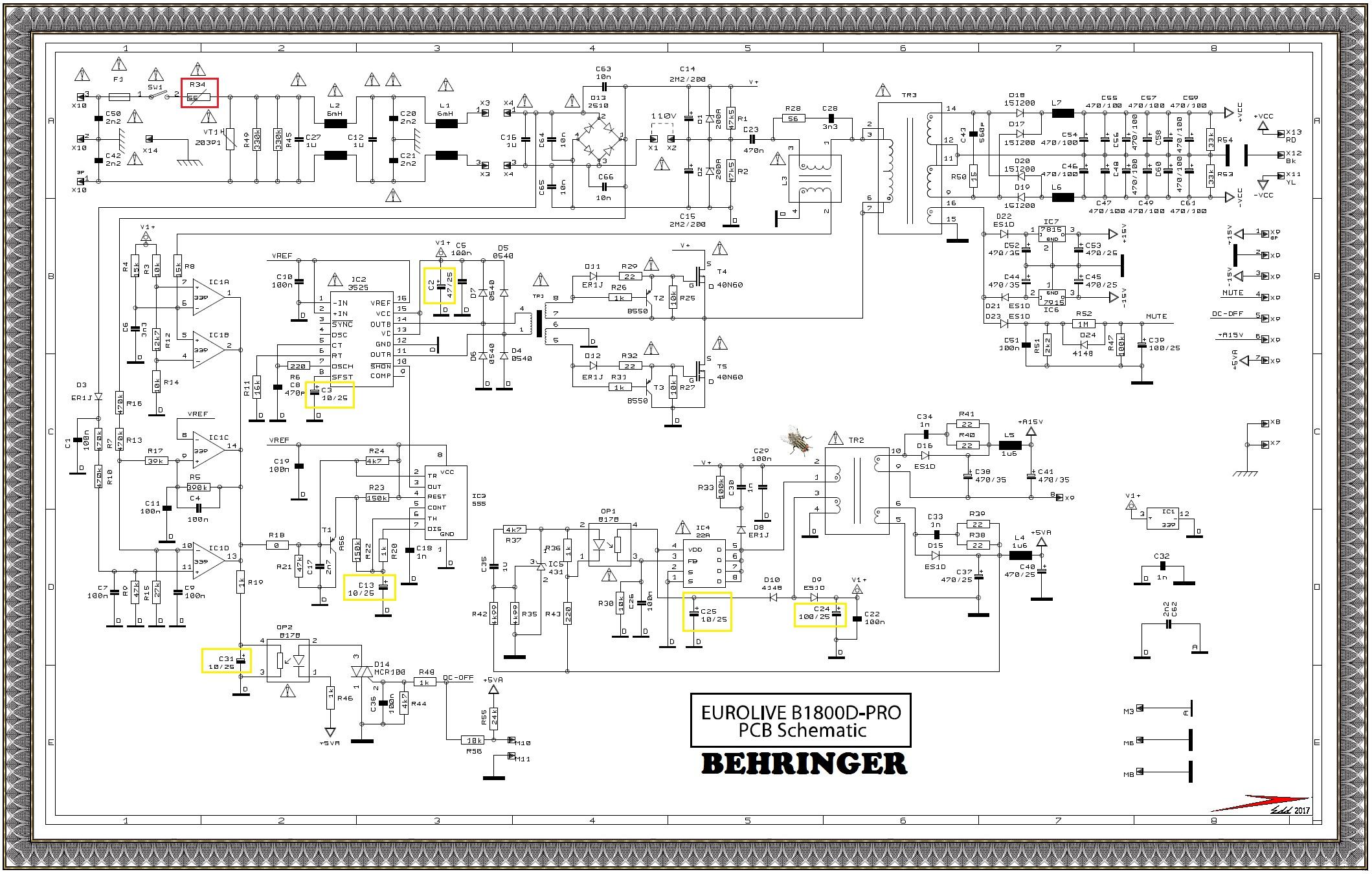 by dacflyer
Ehhh Waiter, there's a Fly on my schematic...

sad to say i have already given the amp back to customer, as they needed it for a gig last weekend..
i may be able to get it back from him later on..but as of now, i don't have it any more.

Nice to see you again Edd, thought you left us for good.
are you hanging out on any other sites now days ?
sure would love to read more of your post..
always great advice..
All times are UTC-08:00
Page 1 of 1
Powered by phpBB® Forum Software © phpBB Limited
https://www.phpbb.com/