by Externet
Hi.
Specifications in television tuner modules always call for the typical 75 Ohm impedance, but am in doubt if modern (or not) digital receiver front-ends are actually much higher than that figure.

I suspect the specs are meant to say ' 75 Ohm coaxial cable is welcome here '
Anyone knows ?

What would be the way to test for such? Adding resistors in series while checking at which point there is degradation of signal strength ?

by Robert Reed
Why do you suspect a different input impedance?
If- the input Z is 75 ohm you feed the input from a generator with a source impedance of 75 ohm and then parallel the input with 75 ohms ( known as "Double Terming") you will see a 3db drop in the input signal - if -you have the proper equipment to do this test. Also the added resistor must be inserted in a manner that will not add any reactance ( a project in itself).
I cannot imagine why the designer would select a different input impedance, After all, RF is RF and the carrier performs the same function whether analog or digital.
In some instances it may be beneficial to change the input impedance, but since 75 ohm is the industry standard you go with what you have.

by haklesup
I know from curve tracing that differential pairs of pins with particular impedances actually do have resistove characteristics with a slope equal to the impedance (linear at least at low current). I'm not sure about a TV tuner but you may be able to simply measure the input impedance with an ohmmeter with the TV turned off. Measuring the impedance of a source or load is sometimes that easy. but not usually, its worth a try though since it will take but a few seconds. (certainly thins method would not work for a cable or antenna which either have very low or very high DC resistance). It has a good chance on an amplifier input like the tuner is.

by Externet
Robert : Impedance is very tightly tied to a frequency. For a TV tuner that spans maaany MHz, impedance varies considerably along its receiving spectrum.

haklesup : An ohmeter cannot measure impedance, and if the input has capacitive coupling, then less.

by Robert Reed
For years we have been using sets with UHF tuners that spanned 400 MHz. I think TUNER is the key word here. I have not delved into TV circuits for several years now. The old analogue sets used turret type tuners and each channel switched in also switched in a new inductor in the input tank circuit - Long gone. Then came electronic tuning in which varactor diodes controlled the LC resonant frequency. I suspect that this method would still be in use today, although it's bias voltage would be controlled by a "wonder" chip. Also keep in mind that for any given channel (s), the LC circuitry is very broad band and to add to that, a certain amount of mismatch is permissible (> vswr 2:1). However, this is the last method I have seen in use as of maybe 8-10 years ago so technology may have advanced on this.
But one thing is for sure - long lines that are badly mismatched can cause ghosting and a whole lot of other evils here.

PS - Don't know if your system is using a "block" converter in which a different type of methodology would be required.

by Robert Reed
One thing occurred to me that may be helpful to your question and that being the use of MMIC (Microwave Monolithic Integrated Circuit) amplifiers. These are amazing amplifiers that exhibit a constant 50 ohm impedance (Also available in 75 ohm) at their input versus frequency. A typical unit will have a constant input Z and 20 db of gain from DC to 4 GHz. Some reach well beyond 6 GHz. I have used these in some of my designs and their beauty is in their simplicity, and they had flat response (+/- 1 DB) across their frequency range. Half dozen components added and you are on your way. Should be enough gain to take a block of signals directly to a balanced mixer for a constant IF output.They are relatively cheap and MINI CIRCUITS are a major manufacturer as well as several other chip makers.
Also as a rule of thumb, a PN junction has a resistance of [26/ma], so a bias current of 0.33 ma should approximate 75 ohms input Z for a stand alone transistor stage. However junction capacitance and Miller effect will come into play here and degrade that parameter quickly with higher frequency into the VHF and UHF spectrum. 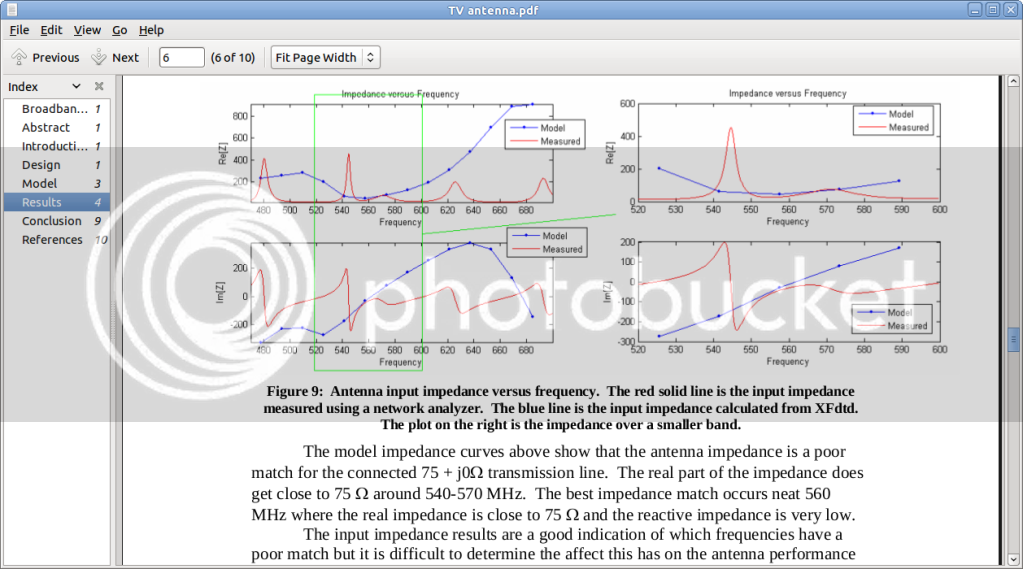 Perhaps TV tuners implemented with constant impedance MMICs would not be a good match either, as the antenna does not produce a constant impedance. For such case, the tuners better be high impedance to grab better signal levels across the band

by Robert Reed
Hi Externet
I had typed a rather lengthy reply last night and forum said it was entered but I don't see it today. Don't feel like going thru all that again - so just the skinny.
I have no experience with the UDA type of yagi so i just except the authors 17 db figure from his PDF. The test was based on a DIY replica of a cheap commercial antenna. The lab test was in an area less than adequate and the TE suffered some inadequacies. These were the authors own words. So the question is - how would a quality commercial antenna right out of the box perform?
Also all the TV antennas I have used or seen have 300 ohm feed points. Then a 300/75 balun if RG-59 or 6 coax is run from that point. I wonder if the standard antenna Z would ultimately match up better.
But all in all, I have to agree with you that there would be peaks and valleys in the antennas broadband response. Hope fully, the mismatch wouldn't be more than 25 or 30 %. It would be interesting to see a manus honest spec sheet on this.

by Externet
Hi.
The subject is shifting from tuners to antennas as we cannot find truthful information about TV tuners, but serves sort of the same purpose confirming an antenna will not present its "nominal" impedance trough the entire band it was 'designed' to work on; and if such is the one fed to a TV tuner, then, the match is non-existant anyway.

I wish I had the ability to understand Smith's charts; here is something on impedance vs frequency :

by Robert Reed
Those look like good sites. Trouble is I am up to my neck in new home construction these days and have very limited time for the computer. But I did bookmark them and when the dust settles will spend a looong afternoon reading thru them.

by EPA III
The 75 Ohm figure is probably due to the characteristics of available coaxial cable and the need to transfer as much POWER from the antenna to the tuner as possible to keep the noise in the system down. Also at RF frequencies, most antennae are going to have an impedance that is in the range of, perhaps 25 to 300 Ohms or so. No antenna is ever going to be exactly any single purely resistive number and as shown in the plots above, they will vary a lot over the frequencies they are designed for. Simple and fairly inexpensive balums are available to convert the actual antenna impedance to the 75 Ohm nominal value. Cable systems were designed to follow the same specs as over the air systems used.

Tuners are designed to take maximum advantage of the existing systems which are almost universally 75 Ohms. Again, they must span a wide range of frequencies (bandwidth) so they will show the same variations that antennae show, but 75 Ohms is surely the design target. I seriously doubt that any designer of a TV tuner would stray very far from this as it would almost surely cause less power to be transferred into the tuner and more noise to be present in the signal.